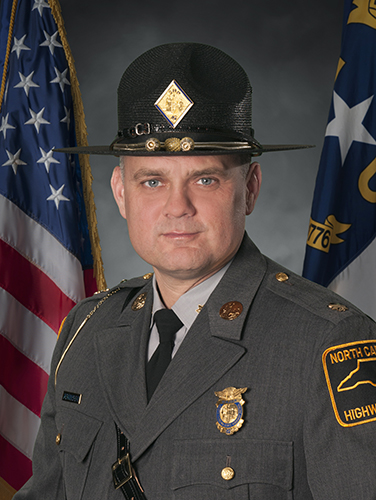 “The brave men and women of the Highway Patrol work tirelessly to protect North Carolina and I’m thankful for their service,” Governor Cooper said. “Commander Johnson has a distinguished record of service and I look forward to working with him to keep our state safe.”

“I am extremely grateful to Governor Cooper for selecting Johnson as the next Commander,” Public Safety Secretary Erik A. Hooks stated. “I’m looking forward to working with Commander Johnson as he will be an integral part of my DPS Leadership Team.”

Major Johnson is a native of Fayetteville. He is a 1994 graduate of FSU with a Bachelor of Science Degree in Criminal Justice. A 1996 Honor Graduate of Highway Patrol Basic School, Johnson began his career as a trooper in Lumberton and has served much of his career in Robeson and Cumberland counties. He was promoted to the rank of captain in 2013 and major on March 1, 2017.

“Being chosen to lead such a great organization with such great people is an incredible honor,” Commander Johnson said. “I will do all I can to support the men and women of the patrol while continuing to build stronger partnerships with the communities we serve across this great state. Together, we can all make our communities safer places to travel, live and work.”

Major Johnson is a 2019 graduate of the FBI National Academy program and 2006 graduate of the Administrative Officer Management Program at NC State. He has been the recipient of the numerous awards, including: 2020 Greater Fayetteville Chamber Award, the Department of Public Safety’s Badge of Excellence Award for Outstanding Performance for Planning and Oversight of Patrol Operations during the U.S. Open Golf Championships in Pinehurst; Highway Patrol’s Samaritan Award; N.C. Governor Highway Safety Program’s 2016 State Law Enforcement Partner of the Year and the North Carolina Association of Fire Chief’s 2016 Fire Officer of the Year.

Johnson is married to his wife of 25 years, Dawn, and has a son, Trey.