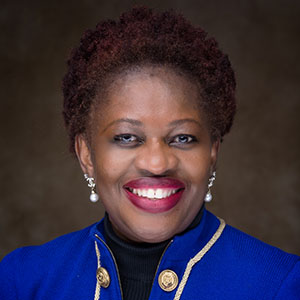 Fayetteville State University is pleased to announce that Dr. Afua Arhin has received a Fulbright U.S. Scholar Program award in Nursing for the 2022-2023 academic year from the U.S. Department of State and the Fulbright Foreign Scholarship Board.

Dr. Arhin is one of over 800 U.S. citizens who will conduct research and/or teach abroad for the 2022-2023 academic year through the Fulbright U.S. Scholar Program. Fulbrighters engage in cutting-edge research and expand their professional networks, often continuing research collaborations started abroad and laying the groundwork for forging future partnerships between institutions. Upon returning to their home countries, institutions, labs, and classrooms, they share their stories and often become active supporters of international exchange, inviting foreign scholars to campus and encouraging colleagues and students to go abroad. As Fulbright Scholar alumni, their careers are enriched by joining a network of thousands of esteemed scholars, many of whom are leaders in their fields. Fulbright alumni include 61 Nobel Prize laureates, 88 Pulitzer Prize recipients, and 40 who have served as a head of state or government.

Dr. Arhin will be working on research around infant nutrition in developing countries. We cannot be prouder of or more elated for this new group of Fulbrighters. Dr. Afua Arhin's research around infant nutrition in developing countries comes at a crucial time in global history as the world struggles to recover from the ravages of COVID. It is particularly useful now to learn everything we can so that we can contribute to raising a robust and healthy next generation of children both abroad and here in the States.  We look forward to the promise of expanded opportunities to get to know and possibly collaborate with other institutions and programs whose mission it is to develop healthy, thriving children," said Dr. Monica Leach, Provost of Fayetteville State University.

The Fulbright Program is the U.S. government's flagship international educational exchange program and is supported by the people of the United States and partner countries around the world. The Fulbright Program is funded through an annual appropriation made by the U.S. Congress to the U.S. Department of State's Bureau of Educational and Cultural Affairs. Participating governments and host institutions, corporations, and foundations around the world also provide direct and indirect support to the Program.

In the United States, the Institute of International Education supports the implementation of the Fulbright U.S. Student Program on behalf of the U.S. Department of State, including conducting an annual competition for the scholarships.

For more information about the Fulbright Program, visit eca.state.gov/fulbright.