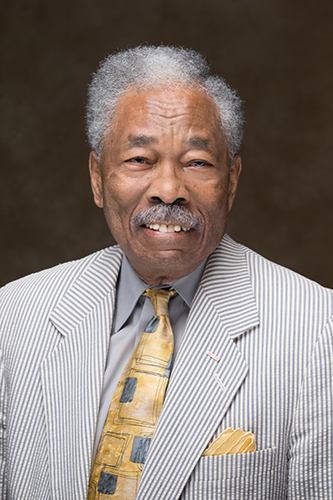 Brown, who served on FSU’s Board of Trustees from 2003 to 2011, including two years as board chair, was honored during the Board of Trustees’ June meeting on the FSU campus. The position of Trustee Emeritus honors a former member of the FSU board over age 65 who has rendered exceptional service to the University. Brown is the 6th person to be named Trustee Emeritus, joining an illustrious group of dedicated volunteer leaders who have helped guide Fayetteville State forward. Trustee Emeriti can attend meetings of the board in perpetuity; however, they do not vote on issues before the board. Previous Trustee Emeriti include Dr. Jack Hill, Mr. James Paige, Mr. Felton Capel, Dr. W.T. Brown, and Mr. Julius Fulmore, all deceased.

“Ben Brown is a shining example of a visionary and strategic leader in higher education, especially at Fayetteville State University,” said Glenn B. Adams, current chair of FSU’s Board of Trustees. “Not only did he help usher in one of the University’s best programs as one of the first MBA graduates, he returned to teach in the Broadwell College of Business and Economics, helping shape future leaders in the classroom through his own experiences. That kind of learning is invaluable for our students as they pursue their own business degrees. We’re glad to have him back on campus any time.”

Brown has a long association with Fayetteville State University, starting when he earned his MBA in 1989 as a member of FSU’s inaugural MBA class, then later when he served for several years as an adjunct professor in the Broadwell College of Business and Economics. He subsequently earned a master’s degree in education administration at FSU in 1991.

Brown is the current chair of the Broadwell College of Business and Economics Advisory Board and the FSU Foundation, Inc. He also serves on myriad other local community boards including the Greater Greensboro YMCA Board of Directors.

Following his military service, Brown spent several years in local government until retiring in 2009. He served as assistant city manager for economic development/deputy city manager for the City of Greensboro and deputy county manager for Guilford County. He also served as assistant city manager, finance director, MIS director, and chief development officer for the City of Fayetteville. Additionally, he worked to secure federal and city funding to support FSU projects such as the FSU Business Incubator and Bronco Square. Brown also worked with developers to acquire the necessary land to build University Place apartments adjacent to campus.

Brown said FSU and Fayetteville have always held special places in his heart. “Fayetteville State is a unique place because its focus is clearly on every student that comes through the door, whether adult learner, military-affiliated, first-generation, or some other distinction, FSU is there for them,” he said. “To help contribute to the futures of others is deeply fulfilling and I am so appreciative to have been a part of it.”

Brown and his wife, Dr. Dorothy Brown, a retired professor in education at FSU and Bennet College, have five adult children, eight grandchildren, and four great-grandchildren.