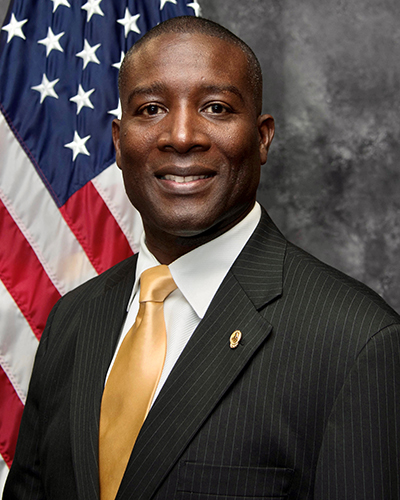 FAYETTEVILLE, N.C., (May 20, 2022) – Fayetteville State University (FSU) has tapped Roberto E. Bryan Jr. as its new associate vice chancellor for police and public safety/chief of police, effective June 7, 2022. Bryan comes to Fayetteville State after nearly three decades in law enforcement, including in the U.S. Army where he was commissioned as a Military Police Officer.

He succeeds former Chief Renarde Earl who retired in December 2021.

“Roberto Bryan brings a rare combination of local, national, global and military law enforcement service and experience to our university police department that make him an exceptional leader who can step into this role immediately,” said Fayetteville State University Chancellor Darrell T. Allison. “His robust relationships in our communities will help us strengthen and elevate the work we are able to accomplish on and off campus. When I look into the faces of parents and guardians of many of the students at FSU, my first commitment that I express to them is that we will do all we can to keep our students safe and protected. With today’s announcement in naming Mr. Roberto Bryan as our next Chief of Police, I am even the more confident in making that promise to our families.”

Bryan is a career law enforcement professional, having served his first patrol starting in 1994 as an officer for the City of Durham, North Carolina. He went on to a decorated career with the Drug Enforcement Administration (DEA), serving in assignments as near as Washington, D.C., and Florida and as far away as the Caribbean, and Central and South America. He retired from the DEA in 2019 as a Special Agent with 22 years of service. He then joined the Fayetteville Police Department where he served as a police major for two years. Bryan’s extensive knowledge of policing and law enforcement is due to a broad range of experience, particularly in supervisory, sensitive, analytical, and technical components which significantly strengthen organizational impacts.

"I am honored to become the new associate vice chancellor for police and public safety /chief of police for Fayetteville State University,” Bryan said. “I am looking forward to the collaboration with the students, faculty and staff in maintaining a safe and secure environment for this institution of higher education both now and in the future.”

Bryan has received numerous awards and recognitions for his exemplary service, some of which include the United States Attorney’s Office Officer of the Year, the West Palm Beach Police Department Distinguished Service Award, Commendations from the Ecuador Minister of Interior and Commanding General of the Ecuadorian National Police as well as numerous DEA accolades. He has also earned numerous police senior management and advanced law enforcement certificates and is a member of several local and national law enforcement organizations.

Bryan and his wife of 26 years, Paulette, have two children.