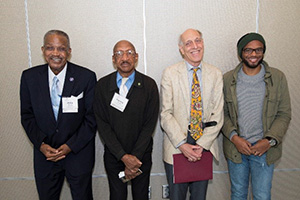 This year's theme was "The Power of Youth Civic Courage: From the Civil Rights Movement to Today." On Friday night, November 9th, FSU commenced the event with guest speaker Mr. Mychal Denzel Smith, New York Times best selling author of Invisible Man, Got the Whole World Watching, a 2017 NAACP Image Award Nominee and consulting producer of the Trayvon Martin documentary, who spoke on Finding Your Inner Political Voice. There were nearly 150 students, faculty, and staff from 24 campuses in North Carolina and beyond that attended the conference. In collaboration with the Fayetteville chapter of Operation Supply Drop, conference participants had the opportunity to write cards/notes to encourage currently deployed troops.

We look forward to next year's conference in early November 2019 at a NC Campus Compact member institution, yet to be named.