Senator Wesley Meredith submitted a Senatorial Statement to Fayetteville State University (FSU) Chancellor James Anderson in honor of the university’s 150th Anniversary. The presentation was made on June 26, 2018 in Raleigh. 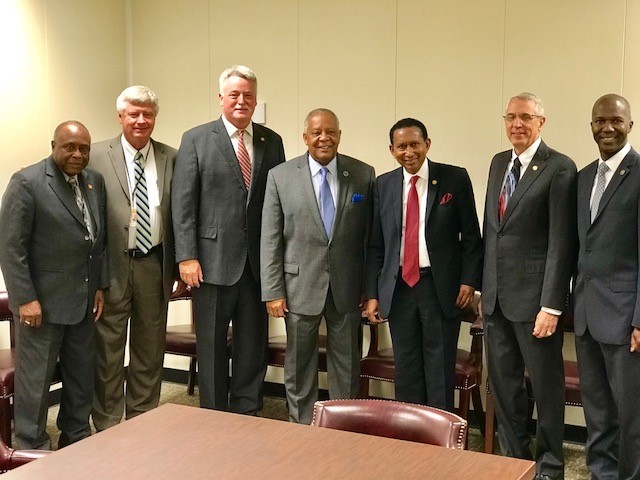 During the presentation, Sen. Meredith requested that the Rules Chair Bill Rabon temporarily suspend the rules to permit Chancellor Anderson to be recognized on the Senate Floor during session. Sen. Meredith asked the members to read the Senatorial Statement before them, which emphasized the historical significance and outstanding academic opportunities that FSU has offered to its students over the last 150 years. He was formally introduced and asked to stand by Lieutenant Governor Dan Forest, which preceded a standing applause from all members of the Senate.

Senators Floyd McKissick, Erica Smith, and Don Davis each stood to thank Sen. Meredith for honoring FSU and publicly recognizing the school's achievements.  They also shared significant information regarding FSU's triumphs and how the school has impacted the many lives who attended it.  Sen. Don Davis asked that the Senatorial Statement to be spread upon the Journals.

Sen. Meredith is in his fourth term in the North Carolina General Assembly. He represents state's nineteenth Senatorial district. The 19th district is made up of Cumberland County.

WHEREAS, be it known that the prestigious Fayetteville State University (FSU) established on November 29, 1867, is the second oldest public institution of higher education in the State of North Carolina; and

WHEREAS, FSU was founded as the Howard School by David A. Bryant, Nelson Carter, Andrew J. Chesnutt, George W. Grange, Sr., Matthew N. Leary, Jr., Thomas Lomax, and Robert H. Simmons, and in 1877, an act of legislature provided for the formation of a teacher training institution for Black North Carolinians; and

WHEREAS, the renowned Howard School became not only the first public normal school for African-Americans in North Carolina, it was also proclaimed the first State-sponsored institution for the education of African-American teachers in the South; and

WHEREAS, in 1972, FSU became a constituent institution of The University of North Carolina; and

NOW, THEREFORE, the esteemed Fayetteville State University is acknowledged and commended for its historical significance and recognized for the outstanding academic opportunities that it has offered to its students over the last 150 years.