The Fayetteville State University (FSU) Theatre Company and the Department of Performing and Fine Arts will host auditions for Fedra, Queen of Haiti, by J. Nicole Brooks, on Monday, September 10, from 2:30-5pm in Butler Theater or by appointment. 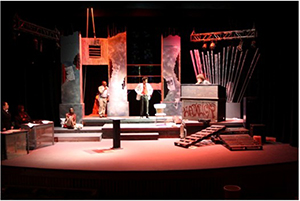 The production, directed by FSU Associate Professor Jeremy Fiebig, opens our theatre season with an explosive retelling of Phaedra that would make Euripides, Seneca and Jean Racine blush. This story of power and lust is set in a re-imagined Haiti that stands as the world's greatest superpower. Only the fiercely mischievous pen of provocative playwright J. Nicole Brooks (Black Diamond) could so ignite the hidden power of this enduring myth.

Strong language and sexuality factor into this production

Apply to audition here. You will be assigned a time to arrive.