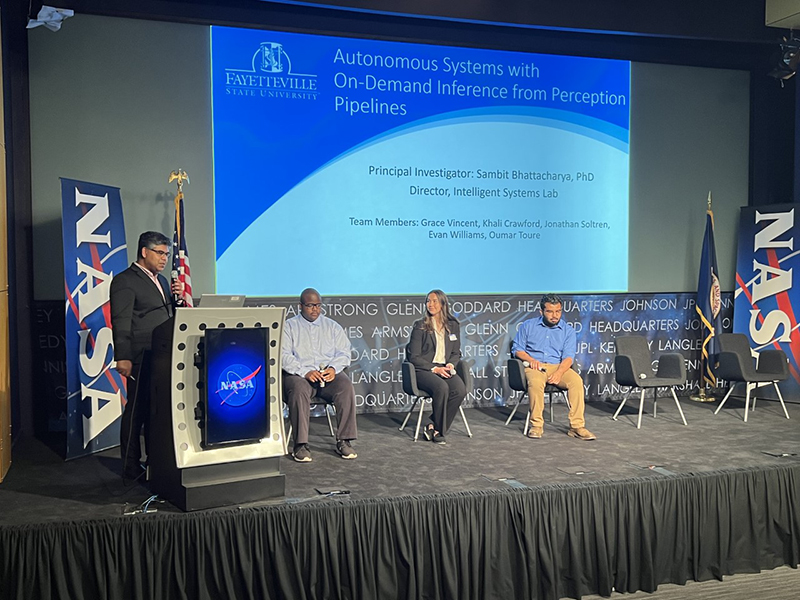 FSU’s winning team, led by Sambit Bhattacharya, Ph.D., a professor in the Department of Mathematics and Computer Science and director of FSU’s Intelligent Systems Laboratory, pitched the proposal, “Autonomous Systems with On-Demand Inference from Perception Pipelines,” to experts and venture capitalists. The novel scientific idea of the proposal is to increase the speed with which artificial intelligence software works on a combination of hardware of different levels of computing power ranging from servers to edge devices, without sacrificing accuracy. It is initially designed to maximize science data from various viewpoints on the Moon and Mars, but greater benefits include adaptability to create a wide range of advanced technological applications in space and on earth.

“I have been winning grants, engaging students in research for a long time at FSU and this time it was different. It was a unique experience,” Bhattacharya said. “There was a high level of interest from NASA officials, scientists and industry professionals who were in the auditorium and joining online. Most importantly our three students understood the significance of the event and could envision where their university education can take them.”

Hosted at the Mary W. Jackson NASA Headquarters (named after the ‘Hidden Figure’), MSI Space Accelerator program competition awardees will be provided with funding, training, and mentorship to develop ideas for systems that can operate without human oversight for future science missions in space and on Earth.

“The initiative and funding from NASA will provide additional resources to strengthen our commitment to mentorship to our students in the STEM areas,” said Monica T. Leach, Fayetteville State University provost and senior vice chancellor for academic affairs.

In addition to funding, finalists will enroll in a 10-week accelerator program, operated by Starburst, that will help them prepare to commercialize their proposals by creating a business plan, refining their pitches, and building relationships within the field. The winning teams will also be matched with mentors at NASA’s Jet Propulsion Laboratory (JPL), the leading center for robotic exploration of the solar system.

The three student team members will join Bhattacharya in the accelerator training program while working on summer internships. Two students, Grace Vincent and Jonathan Soltren will intern at JPL. Khali Crawford will intern at the Naval Research Lab in Washington D.C., the flagship research laboratory of the United States Navy. Under Bhattacharya, the students, including many others who may be part of a future university-based startup, have been learning advanced research skills at the Intelligent Systems Laboratory.

This esteemed award is not the first for the team, who also received several previous grants from NASA and JPL.

Other MSI Space Accelerator awardees include teams based at California State University, Northridge and University of Massachusetts Boston.

Sambit Bhattacharya, Ph.D. is a professor in the Department of Mathematics and Computer Science and director of FSU’s Intelligent Systems Laboratory. He has taught computer science at Fayetteville State University since 2005. His research interests are in machine learning, computer vision and their applications in robotics and geospatial data analysis. He teaches in these same areas, including introductory programming and computer systems. His research and education program development efforts have been supported by grants from the National Science Foundation, the U.S. Department of Education, the National Geospatial Intelligence Agency, and the U.S. Department of Defense. Dr. Bhattacharya collaborates with scientists at research laboratories of the U.S. Department of Defense and works with industry on applied research projects. In 2017 he served as Faculty in Residence at Google Inc., Mountain View, California.