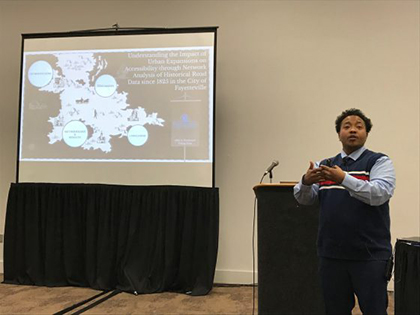 The award was presented to Frederick for his geospatial research aimed at Understanding the Impact of Urban Expansions on Accessibility through Network Analysis of Historical Road Data since 1825 in the City of Fayetteville. Frederick was supervised by Dr. Trung Tran, Assistant Professor in the Department of Government and History, who is studying the urbanization of the City of Fayetteville from multi-source geospatial data. Frederick orally presented his research at the conference to more than 40 GIS professionals and students from across North Carolina.

The G. Herbert Stout Awards honor the leadership and memory of Herbert Stout, who used to be Wake County Commissioner and Chairman of the Triangle J Council of Governments and who led the creation of a North Carolina GIS Conference informing and educating local government. The awards recognize local governments and students who are engaged in advancing the use of GIS.

Student award recipients are selected by their respective colleges and universities. Being selected and honored to represent Fayetteville State University, Frederick said: "My experience during the conference was both daunting and inspiring. The GIS and Remote Sensing capabilities far exceed the realms of mapping and is truly an interdisciplinary field. I never thought I would meet people in not only the scientific and engineering fields, but I also had the pleasure to connect and network with others in the medical, administration, and business fields. It was an honor to be chosen to attend and speak at this bi-annual NC GIS 2019 to tell the history of urbanization in Fayetteville through geographic network analysis. Furthermore, the way the job market is now, and technology developing at a rapid pace, I'm relieved knowing that when I graduate that my degree will lead me to succeed in life."