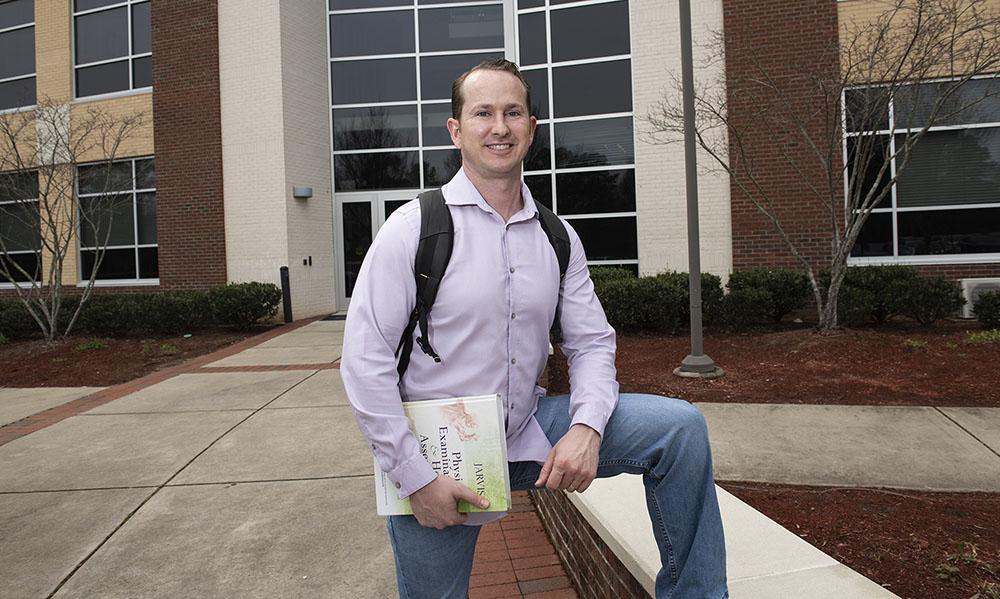 SFC Jacob Howe knows a thing or two about comebacks.

In high school, he admits "barely graduating," with a 1.6 grade-point average. In college, he achieved a 3.82 GPA to earn a Bachelor of Science degree in Nursing in 2019 - while also serving as a decorated Green Beret and balancing life as a husband and father to three children.

Credit the people and programs of Fayetteville State University.

"If you have a question, the professors are always there for you," he says. "They're going to help you - from the top-down. They're here because they care about the future of nurses."

Jacob, 38, is candid about his journey. Originally from Peoria, Illinois, he grew up as the third of four children in a home where work was not only valued, but practiced every day. After his father was laid-off from a factory job, the family relocated to a rural area of Missouri, so he could gain new employment. Jacob also was fixated with work. By age 15, he was working almost full-time while also attending school.

After graduating from high school, Jacob was employed in the travel and tourism industry before deciding to join the military. A chance encounter just prior to signing up became his epiphany. While visiting a brother in Air Force Basic Training in San Antonio, Jacob came upon a horrific car accident. He didn't hesitate to stop and help an injured woman until an ambulance arrived. "The paramedics said I did a good job," he recalls. That experience stayed with him - the ability to aid someone in need.

Fast forward to his Army service and, ultimately, January 2018. That's when he enrolled in FSU's Nursing School after completing his prerequisites at Campbell University, while also serving as an instructor at the Joint Special Operations Training Center at Fort Bragg. Jacob had an immediate reference point regarding FSU's Nursing School. His wife graduated from the program and is currently a registered nurse at Womack Army Medical Center

"FSU gave me the opportunities while I am active-duty to accomplish my next steps," he says. "FSU truly helped me set my eyes on what I want for my final career."

Sharon Gallagher, a lecturer in the Nursing School, calls Jacob "one of the hardest-working students" she has ever known. "He wants it to the nth degree," she says. "He's tenacious."

Jacob will tell you that he inherited that tenacity from his father, who never let a setback get him down, often juggled three jobs, and ended up achieving major career success.

With focus and determination, Jacob is on-track with plans to get commissioned as an Army officer, continue his education and become an emergency nurse practitioner.

"I'm 180 degrees from who I was in high school," he says. "Working in Special Operations has been the pride of my career, and I look forward to this new chapter and my journey in the Army Nurse Corps with a high level of enthusiasm."