Laura Lovell, a Fayetteville State University (FSU) undergraduate student pursuing a major in Chemistry and Physics with a minor in Materials Science, recently won the Award of Excellence at the 24th International Conference on Application of Accelerators in Research and Industry (CAARI 2016) held in Fort Worth, Texas (https://www.caari.com/). 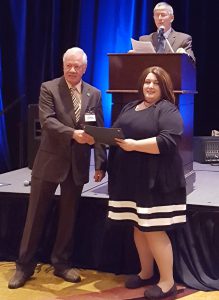 Lovell's research on "Morphological and Hardness changes in silica implanted with MeV heavy ions," is a technique which can be used to create high efficiency thermoelectric devices. Specifically, her research enables a better understanding of the changes in the surface morphology of Infrasil (a type of optical quartz silica) when ion implantation and subsequent annealing are used to induce the formation of metallic nanocrystals beneath the surface. Laura Lovell and Chibu Umerah also presented a lecture and two poster presentations on ion beam radiation effects on Physical and Mechanical properties of silica, as well as on studying the heavy element content of polymers used for toy manufacturing. Ms. Umerah is also an undergraduate student majoring in Chemistry and Physics with a minor in Materials Science. The poster presentations by Umerah were "Change in the optical properties of Ag and Au implanted Infrasil silica" and "Elemental Analysis of selected toys by Rutherford Backscattering Spectrometry (RBS), Electron Microprobe, and X-ray Photoelectron Spectroscopy (XPS)." The other co-authors of these projects are FSU faculty members Dr. Z. Luo, Dr. D. ILA (Mentor), and Dr. D. Demaree (US-ARL). The CAARI Conference series is unique in that it brings together scientists, engineers, professors, physicians and students from all over the world who use particle accelerators in their research and industrial applications. Each year the Topic Areas are reviewed and updated to reflect current research interests. This conference began in 1968 as a Conference on the Use of Small Accelerators for Teaching and Research and in 1974 became known as the International Conference on the Application of Accelerators in Research and Industry (CAARI).