Dr. Lamont Booker graduated from Fayetteville State in 2003 with a major in Biology minor in Chemistry. After earning a master’s degree in Toxicology from NC State University and then a Doctorate from Virginia Commonwealth University, Booker now works in the field of Toxicology – a field he knew nothing about as a young student at FSU. Now, as a working professional, Booker makes it a priority to mentor, lead, and invest in FSU students so that they can grow and thrive like he has. 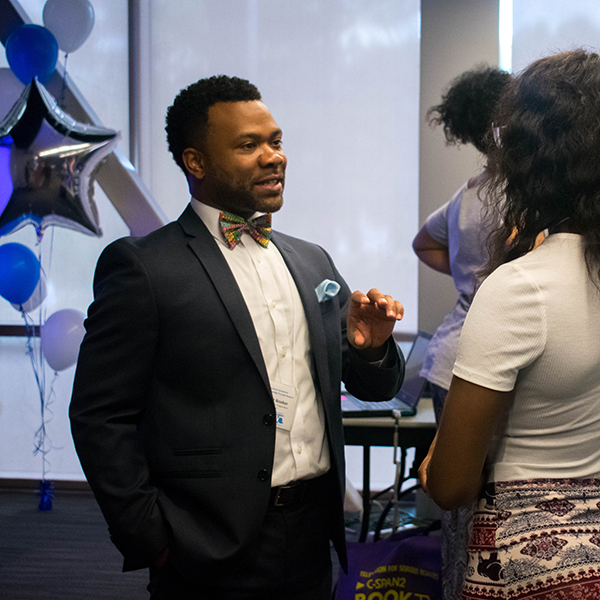 Booker grew up with his father serving in the Army, so he moved around a lot. He considers Fayetteville his home and decided to attend FSU when he was awarded a Chancellor's Scholarship. Attending FSU did not disappoint and Booker says his time at FSU was fulfilling and everything he expected from college life. He credits his time at FSU with helping him to develop into a well-rounded person.

At FSU, Booker was involved in numerous activities. He spent his time in SGA, the BioPhiChem Science Club, and also served as a resident assistant for three years. Booker also represented FSU as Mr. Homecoming 2002.

While at FSU, Booker worked closely with his science professors, specifically Dr. James Raynor and Dr. Sherrice Allen who mentored and invested in him. He originally planned to go to medical school but then his professors introduced him to scientific research and the field of toxicology.

"Shows like CSI and Forensic Files were becoming bigger so with those shows and my mentors, we thought it would be a good blend for my strong chemistry and biology experience," Booker said.

Booker got his master's degree in toxicology in 2005 and decided to take a year off to work in the toxicology field before going back for his doctorate degree.

"As the first-generation college graduate in my family, I initially thought having a bachelor's degree was quite the achievement. Then I got my masters and that was above and beyond where I imagined I would be," Booker said. "I am the youngest of two siblings, born to teenage parents with a high school education, so I never imagined this pathway for my life."

His first job landed him at Laboratory Corporation of America where he worked and helped develop the esoteric testing laboratory. As a medical technologist, he would screen and test various samples (i.e., hair and oral fluids) for the presence of drugs (therapeutic and drugs of abuse), but after working there for a year, he realized that he wanted more.

"I realized I could only go so far with a master's degree in this field. Furthermore, my supervisor was making significantly more money than me while I was providing him with some of the training on the techniques we established in the laboratory," Booker said.

In 2006 Booker decided to go back to school to get his Doctorate in Pharmacology and Toxicology. He applied to Virginia Commonwealth University but was admitted in a non-traditional way.

"Initially I wasn't accepted to the program.  By a combination of stubbornness, eagerness, and drive, I called them and asked for an interview," Booker said. "After the interview, they said I was one of the best prepared students to interview that year and granted me admission on the spot."

While at Virginia Commonwealth, Booker published six articles in Peer Reviewed Journals and received his own grant from the National Institute of Health to study drug abuse. The grant supported his doctoral research and he was able to travel nationally and internationally to present his research findings to different organizations.

Booker graduated with his doctorate in 2011 and was awarded the Lauren Woods Award for research excellence among the top Doctoral students in his department. Following graduation, Booker worked for the Department of Defense (DOD) Medical Research Institute for Chemical Defense where he worked to develop antidotes to chemical and neurological agents. He then worked for the Defense Threat Reduction Agency doing similar work - preparing for and combating weapons of mass destruction and improvised threats and ensuring nuclear deterrence.

In 2013 Booker took a position with the U.S. Food and Drug Administration and now works as a Toxicologist and Lead Reviewer. He reviews different applications to assess the safety and effectiveness of products prior to being sold on the market to the public.

"I work primarily with medical claims to verify the claims and to make sure the products are safe for patient use," Booker said. "There's a lot of responsibility but it has a long-lasting impact globally dealing with medical devices that can help a patient who is in need -- getting them groundbreaking devices that can help them have a better way of life.  That is the most rewarding part."

Throughout Booker's career and success, he hasn't forgotten FSU or the mentors that invested in him as a young undergraduate student. He has remained connected to his Fayetteville State community since graduating. He returns to campus on a regular basis for different round-up sessions and has also returned for STEM (Science, Technology, Engineering and Mathematics) symposiums on campus.

"Since 2003, I made it my business and more or less obligationto give back to the students what I thought they needed at the time. I remember when I was a student and what I needed and what helped me along the way," Booker said. "Every year a number of students who have gone on to careers would come back and have a panel discussion and give students our perspectives on life, career fields and the path to success.  I would come back annually for that to try to keep students encouraged and motivated. I came back to campus as a keynote speaker for the STEM symposium in 2018."

When Booker is not working, he follows another passion of his, motivational speaking. He and his business partner, Sir Walter Hemphill travel across the country to different schools and churches motivating parents and students -- keeping them up-to- date on the importance of education, college opportunities, career motivation, STEM, and life beyond that. In 2017, he launched Lamont Booker LLC, which aims to equip students and parents with the necessary tools to have a successful career.

On average Booker does two or three motivational speeches per quarter but is looking to increase this number as he sees a growing demand for information of this type. He thrives knowing that he is giving back to other students and helping them achieve their dreams by sharing his story.

"Anytime you hear a student say, 'I really needed that!'-- that beats any dollar value you can put on it," Booker said. "A Career in STEM can be rewarding and challenging at the same time but the global impact makes it worthwhile. If you work hard at it, you can achieve whatever you are seeking to achieve All it takes is Perseverance, Humility, and Determination, P-H-D.  - it's not about your degree but your mentality."