At the age of 38, Don Serate has been through a lot. The pain, heartache, and challenges he has had to endure have taught him to be resilient, confident and to believe that he could overcome anything. 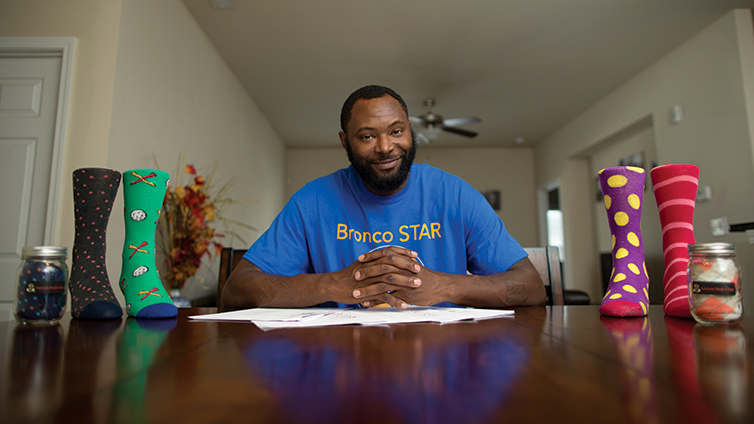 As he runs his own business and also attends FSU full-time, that's exactly what he is doing, and he's doing it with amazing energy and a positive attitude.

Originally from Harlem, NY, Serate faced a mountain of adversity from a young age. The oldest of three boys, Serate was raised by a drug-addict mother and was thrown into the foster care system at the age of 8 when his mother was murdered.

"My mom was on drugs - cocaine and crack and was murdered in a drug deal gone bad," Serate said. "As an 8-year-old black boy, it was hard to get adopted ... it was one of hardest thing to do."

After living in 21 different foster homes in four years, at the age of 12, Serate was adopted by a single white man, a Wall Street banker. His two younger twin brothers were adopted together but into a different home and they lost touch for 10 years.

Serate's adopted father, John Coleman, taught him about saving, investing, and owning his own business.

"It felt good to be adopted ... it was good to be stable for at least 4 years," Serate said. "Being adopted by a man who was really about his career ... he didn't have a wife but had a lot of women and I picked up on that ... I struggled with trust and being faithful."

Serate suffered more loss when Coleman passed away in 1996. At the age of 16, Serate moved to yet another home, to be with his biological family, an aunt and uncle from his mom's side in Augusta, Georgia.

His life in Georgia was very different than the life he had been living in New York. Serate says he learned a lot of different traits from his father and his family in Georgia.

"I learned a lot about the service part of life, cleaning, and cooking when I went back to my people. I learned how to work hard and to work for someone, and to be a good person. From slavery, these were the jobs you grew up in - serviceability," Serate said.

"On the other side I was raised how to think logically. I was always taught through my dad how to move on my own, move logically, move without serving other people. I was just taught how to love yourself first, but from my auntie, I was taught how to love others first."

Serate finished high school in Georgia and enlisted in the Army where he served as a logistician. He rose through the Army ranks quickly, going from an E1 to an E7 in 8 years.

"The Army was the best thing that ever happened to me. It was pretty easy. All I had to do was do what I was told," Serate said. "I learned from a lot of great mentors on what to do and not to do. They helped shape me in a lot of adverse situations ... I have been good under pressure since I was eight."

After serving in the Army for 15 years, which included seven deployments to Kosovo, Bosnia, Afghanistan, and Iraq, Serate took an early retirement. His last duty station was Fort Bragg and he decided to stay in Fayetteville and go back to school.

He began working several jobs while awaiting his retirement paperwork. Serate knew that he wanted to go back to school to get his degree, and after looking around, he decided on Fayetteville State. Because of his life and military experience, he began Fayetteville State with 40 credit hours. He is currently at 91 credit hours and will graduate next spring.  He plans to continue his education and get his Master's in Public Administration. 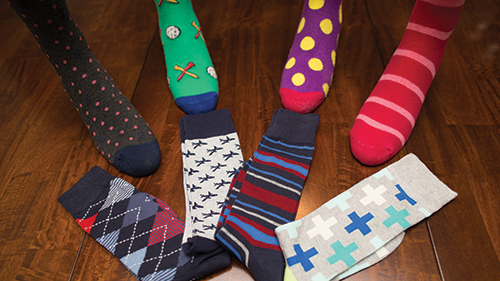 In his first year at FSU, at the age of 37, Serate became the oldest college basketball player in the country when he joined the FSU team. Serate, who is the father of four boys, Tyler, 14, Ray, 13, Jordan, 11, and Kyree, 4, could not play his second year because he gained custody of three of his boys.

"I made a lot of grown man decisions as a child but God doesn't make mistakes and now things are coming in to place," Serate said. "I was raised by a single dad and now I am raising my kids as a single dad."

Getting his degree was not the only thing on Serate's mind. His father had put the bug of entrepreneurship into his mind, and he knew that one day he wanted to start his own business. That day came sooner than expected.

"At the time I was getting out of the Army and delivering pizzas, etc., I wanted to be an entrepreneur, but I wanted to do something or sell something that I loved ... not just for money," Serate said. "I am a very fashionable guy and the logical choice that had low risk and high reward was socks."

From that, Success Socks by Don Serate was born. After researching the $7.9 billion sock industry, Serate found someone who happened to be selling their sock business and the last 300 pair of socks that they had. Serate purchased it, made connections in China, Thailand, and High Point, NC where the socks are made, and he got his business off the ground.

Success Socks by Don Serate, Inc. quickly became a family business. He currently has two people on payroll and each of his three sons helps with the business with sales, packing, and shipping.

Because Serate runs his business out of his home and the advertising and ordering is done through social media such as Instagram and Facebook, the overhead is really low. He began a program for his customers called the Success Sock Club where they don't choose the style of sock they get, but it is a surprise. It has become very popular.

"We make all kinds of socks ... dressy, sporty, polka dots, argyle, different characters," Serate said.  "It has always been a profit, low-risk, high-reward business. The most challenging aspect is advertising but social media is huge. With our generation, you had to have a website, but with the current generation, they flip through some pictures on social media, etc., have the Cash App or Paypal, and that's it. With that money coming in, you take and order what they need."

Serate plans to continue with his business until his oldest son turns 18 and can take over the business as he goes off to college.

"I am breaking generational courtesies in my family. I never had options until I was adopted. So many young African American children are being told that they should go to school so they can get a good job instead of go to school so you can own a company and work for yourself," Serate said.

Despite the adversity that Serate faced, he has never allowed himself to be the victim of his circumstances and has found a way to rise above the challenges. As a non-traditional student attending FSU, Serate loves serving as an older mentor to students and being able to be mentored by those at FSU.

"FSU means everything to me, I am like the big guy on campus. I am a big mentor or a big brother to those who are 18 or 19," Serate said. "I have done it already. I am still really cool because I can relate to them, their music, how they feel, etc. I am the piece in between, the cool uncle. They respect and listen to me. I speak truth. I tell them to get their education, get a job, and to stay focused."