The Road to Broadway 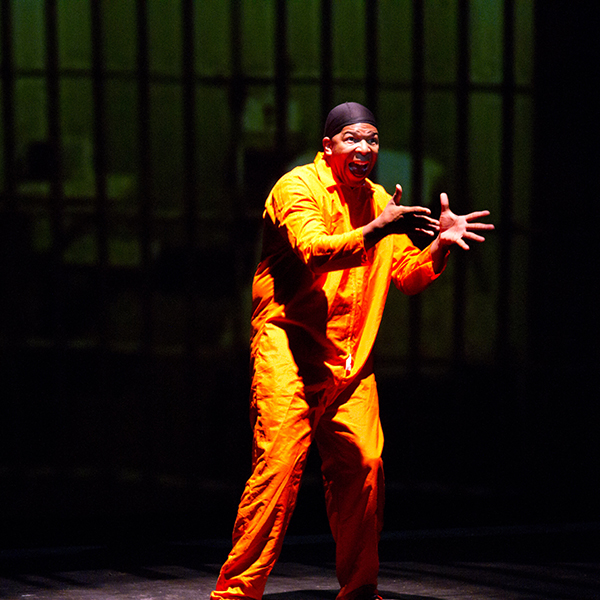 He was driving down a Pennsylvania highway one day when he heard the siren that would change his life forever. As he pulled over, he realized he was surrounded by cops. He was quickly arrested and landed in jail for 24 days. Extradited to three different states, witness to gangs, murders and stabbings, this husband and father of two thought he was being set up. In some ways he was - by an identity thief and by God.

"When the Lord has a purpose for you He has to put you through the fire, so you can come out shiny gold," said Brian Mayers, surplus inventory coordinator and alumnus of Fayetteville State University.

"I was thrown into a cell of 60 men. Murderers, rapists, everybody. I saw a guy get stabbed in the eye with a pencil all because he was in the wrong gang," Mayers said. "I just couldn't believe it. I was shell shocked."

Growing up in New Jersey and traveling to New York, Mayers wasn't unfamiliar with crime and troubled people. They were all around - even at home. His father drank for 45 years and ruled the home with an iron hand. According to Mayers, he was a good provider, but not a good communicator.

"He never told me he loved me," Mayers said.

His mother brought balance to the household. She was his moral compass. At a young age she told him to "love people, respect them, and be kind."

"My mom always told me not to fight but because of bullying I got into martial arts," Mayers said. "And that became my love for a long time."

As a black belt, Mayers made a career of martial arts. He was ranked number two in New Jersey as a kickboxer and a five-time city champion. He traveled for tournaments under contract with Madison Square Garden and fought competitors like Taimak from The Last Dragon.

After years on the martial arts scene it was as if overnight he was finished and wanted to get into acting. Mayers credits martial arts for building his confidence and helping him with the transition.

Finding this new love, Mayers started writing and acting. He also joined a traveling children's show with the Negro Ensemble where he made costumes and wrote scripts.

Then the flashing light in his rearview mirror, for speeding, changed everything.

After the longest 24 days of his life, Mayers was exonerated of all charges. At this point though his name had been slandered in the news - he lost a lot.

"I asked God, 'Why do you have me here?'," Mayers said. "But through the process I came to the conclusion, 'God, what do you want me to do, to do your will?"

Through forgiveness and his desire to continue acting and writing, Mayers enrolled in college and eventually found his fresh start in North Carolina.

Little did he know God wanted to use this fresh start as a way to reach young men in detention centers.

Mayers accepted the call. His compassion that his mother taught him early on kicked in.

"Writing is my pulpit." Mayers said.

Three years later Mayers finished his play, The Cycle, a one-man play which he first performed on the FSU campus in Butler Theater. The play was inspired by his life and experience in jail.

Mayers has traveled around the country to detention centers where he teaches young men, ages 12-18, that there is hope after jail. After mistakes.

"I will never stop doing this," he said. "After the play, I have open dialogue and I've seen these guys cry, ask questions, even take off their gang colors. That's huge. I share scripture with them and tell them about Jesus Christ. If I can reach one of them, it's worth it. They shouldn't have to pay a lifetime for one mistake they made."

Mayers paid for mistakes he didn't make. But through that experience he has changed the lives of hundreds around the country.
---
His wife, Toni Henderson-Mayers encouraged him to submit his play to the United Solo Theater Festival where it was chosen to be produced on Broadway.

On October 28, Mayers will travel to New York City to perform The Cycle at Theater Row on 42nd Street. The play tells the story of three generations of men, their struggles and how the cycle can be broken. Tickets can be purchased on his website www.brianmayers.org. His book of the same name is available at the FSU bookstore. Plans are in the works for a book signing this fall.