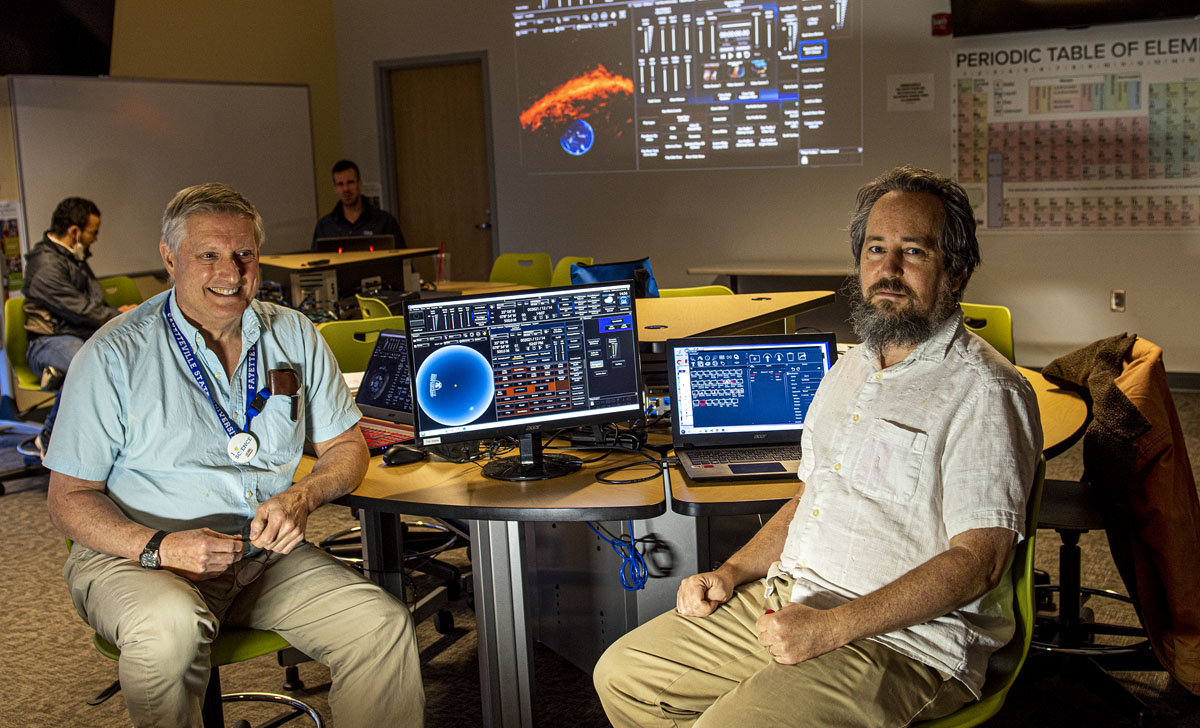 Joe Kabbes, left, and Dr. Jonathan Breitzer recently immersed themselves in a software training for FSU's newly renovated Planetarium and Exploratorium. The facility is set to open in early 2022 as a NASA Informal Education Community Anchor, one of only 21 sites nationally.

Fayetteville State University's Planetarium has achieved a designation that just might be described as "out of this world." It has been selected as a NASA Informal Education Community Anchor - one of only 21 sites across the country.

Joe Kabbes, the Planetarium manager, wrote the grant proposal to NASA in spring 2021 and received the good news by year's end. The implications are powerful, he says. The Planetarium and related areas will be used to enhance STEM (Science, Technology, Engineering, Mathematics) engagement by using and sharing NASA STEM learning resources and opportunities. The NASA designation includes funding to support the Planetarium's local STEM impact.

Furthermore, a program titled  "Rockets and Robots" will support engagement in NASA priorities in space exploration, with a focus on rocket science and robotic exploration. These themes will be part of school visits, public events and out-of-school STEM programs offered through the Planetarium, according to Kabbes.

The timing is perfect, he points out. The Planetarium, which has been undergoing extensive renovations, will reopen in early 2022. The facility will include one of the highest resolution projection systems in North America, as well as an Exploratorium. "And, of course, we will reopen as a NASA Community Anchor," Kabbes says. "This is a wonderful opportunity for both our Planetarium and the community."

Dr. Jonathan Breitzer, Planetarium Director and an assistant professor of chemistry at Fayetteville State, adds, "Being a NASA community anchor is a great honor. The FSU Planetarium serves a wide area of North Carolina, much of which is underserved. This is a tribute to Mr. Kabbes' hard work and commitment. I look forward to the reopening because this is a significant way in which the University interacts with the community."