“FSU has given me a better understanding of who I am – and who I want to be in life.” 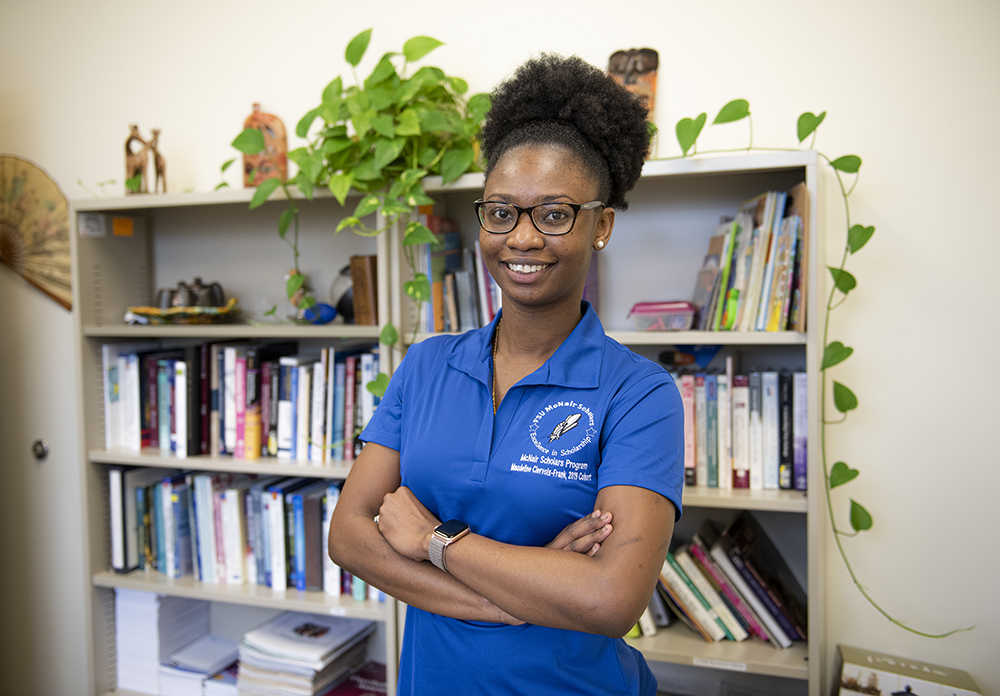 Growing up in Port-au-Prince, Haiti, she became deaf in her left ear at age 9 because of an untreated infection. At 14, a 7.0 magnitude earthquake devastated her country with 3 million people affected, including about 250,000 lives lost. Many of them were her close friends.

Now on the cusp of turning 25, Maudeline is a study in unbridled joy. A McNair Scholar, she is a recent Fayetteville State University graduate and the wife of an Army sergeant stationed at Fort Bragg. When she ambles into the FSU Psychology Department for a visit, she lights up a room. Xenia Lopez, an Administrative Specialist who encouraged Maudeline throughout her days at FSU, is thrilled.

"One of the things that stands out about Maudeline is her friendliness," Lopez says. "She has that desire for learning. She's just an excellent student who wants to succeed."

Maudeline's journey began as the curious middle child of a father who worked as a private driver and a self-employed mother. In 2010, the father and three children joined the mother who had been living in Queens, New York. Maudeline was enrolled at a high school with immigrant students from all over the world.

"It was tough," she says. "There was no one from my country. I was supposed to be in 10th grade, but they put me in 9th grade. It was an hour bus ride to and from school."

She also had to learn how to speak English - and was honored at her new school for being "the fastest learner." Haitian Creole and French are her native tongues, and she also picked up Spanish quickly from Dominicans who befriended her at school.

She balanced her studies with work in a convenience store and then as a room-service operator for a hotel. She attended a community college and also earned her certificate to become a home health aide. Love called in the form of a neighborhood boy who played soccer with her brother. Timothy Frank, a soldier, proposed. The couple were married in 2016.

That's how they came to Fayetteville, and specifically, how Maudeline discovered Fayetteville State and began exploring education options. "That's when I started talking to Ms. Xenia Lopez. She gave me hope."

Maudeline says she is grateful to the faculty and staff for ensuring her success, including her mentor, Dr. Melanie Shorter and also Dr. Chu-Chun Fu. "The Psychology and McNair research staffs became the family and support that I needed on my journey," she says.

In December 2019, Maudeline earned her Bachelor of Science degree in Psychology with a 3.6 grade-point average. Her goal is to pursue her Master's and Doctorate degrees and become a Counselor. Currently, she is a math tutor at Anne Chestnutt Middle School.

"All the struggles made me determined to be the best scholar I can be, and I am forever grateful for all the opportunities that I have received in the United States," she says. "The education system in Haiti has never been great, and it was always a struggle to even finish a school year peacefully because of political rivalries."

Maudeline credits FSU with changing her life and giving her a bold, new direction.

"FSU has given me a better understanding of who I am - and who I want to be in life," she says. "It's been about finding my voice, my story."